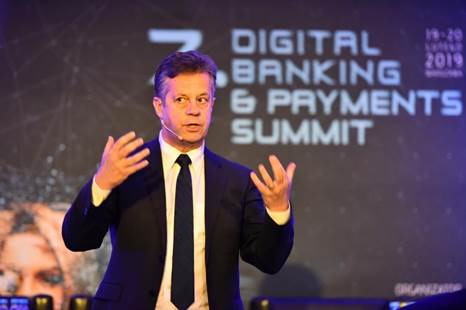 Geneva, Switzerland – February 19, 2019: WISeKey International Holding Ltd (WIHN.SW) (“WISeKey”), a leading Swiss based cybersecurity and IoT company, today announced that its CEO Carlos Moreira presented at the 7th  Annual Digital Banking & Payments Summit in Warsaw, Poland (http://digital-finance.pl/en/).  Over 800 visionaries, market leaders and representatives of more than 150 companies gathered this year in Warsaw to discuss the future of digital banking and payments, share cutting-edge-technologies designed to improve customer experience and put humans in the center of this transformational process.

During his speech, Mr. Moreira emphasized the need of establishing an Artificial Intelligence (AI) watchdog under the auspices of an international organization such as The OISTE Foundation (OISTE.ORG). While AI can meaningfully improve peoples’ lives, it is important to build systems that make decisions free of human biases and manipulations. For example: while hiring by algorithm would give men and women an equal chance and sidestep racial and gender prejudice in policing, new studies show that computers can be biased as well, because AI systems are only as good as the data humans put into them. Bad data can contain implicit racial, gender, or ideological biases.

Many AI systems will continue to be trained using bad data, making this an ongoing problem. Thus, a third-party independent body is required to ensure transparency, fairness and regulate automated AI decision-making. As per ethicist Jake Metcalf of Data & Society, more social scientists are using AI intending to solve society’s ills, but they don’t have clear ethical guidelines to prevent them from accidentally harming people. Currently there aren’t consistent standards or transparent review practices. The guidelines governing social experiments are outdated and often irrelevant, meaning researchers have to make ad-hoc rules as they go.

The OISTE Foundation could provide the initial support and funding for such an AI watchdog.

The OISTE Foundation has been working with United Nations and other governmental and non-governmental international organizations since 1998. Today, in line with the United Nations’ Sustainable Development Goals of giving everyone a legal identity by 2030, OISTE focuses on the challenge of harnessing digital identity and algorithmic technologies for the global community. OISTE holds special consultative status with the Economic and Social Council of the United Nations (ECOSOC) and is an accredited member of the Non-Commercial Users Stakeholders Group (NCSG) of ICANN as part of the Not-for-Profit Operational Concerns (NPOC) constituency.

About WISeKey:WISeKey (SIX Swiss Exchange: WIHN) is a leading global cybersecurity company currently deploying large scale digital identity ecosystems for people and objects using Blockchain, AI and IoT respecting the Human as the Fulcrum of the Internet. WISeKey Semiconductors secure the pervasive computing shaping today’s Internet of Everything. WISeKey  has an installed base of over 1 billion microchips in virtually all IoT sectors (connected cars, smart cities, drones, agricultural sensors, anti-counterfeiting, smart lighting, servers, computers, mobile phones, crypto tokens etc.).  WISeKey is uniquely positioned to be at the edge of IoT as our semiconductors secure a huge amount of Big Data that, when analyzed with Artificial Intelligence (AI), can help industrial applications to predict the failure of their equipment before it happens.

Our technology, trusted by the OISTE/WISeKey’s Swiss based cryptographic Root of Trust (“RoT”) provides secure authentication and identification, in both physical and virtual environments, for the Internet of Things, Blockchain and Artificial Intelligence. The WISeKey RoT serves as a common trust anchor to ensure the integrity of online transactions among objects and between objects and people. For more information, visit www.wisekey.com.

WISeKey to Showcase WISePhone Genesis at the 2019 Mobile ...