Jean-Claude Biver and Carlos Moreira will launch the NFT auction and will debate on the repercussions of NFT for the luxury watch industry during a fireside chat:  https://us02web.zoom.us/webinar/register/WN_z9XPb67_QfyXqXgT0CRQ1w 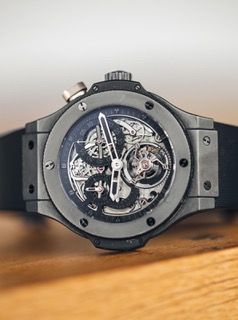 The NFT auction will feature the Hublot Big Bang “Standard” watch, which has been with Jean-Claude Biver since the end of 2005, and has served Hublot as a reference for all the future Tourbillon parts and complicated watches.  The design of this unique watch is expressed by the absence of a real dial and the absence of color. In fact, it is the movement, which, with its finish and functional design, replaces and plays the role of the dial. The Hublot Bigger Bang has also served as a reference for the so-called “skeleton” watches where the dial is the movement or the mechanism.  The watch features a “stealth” “mono colore” style thanks to the micro-blasted black ceramic and the brushed / polished finish of the constituent parts of the movement.  This watch has been with Jean- Claude for more than a quarter of a century.

“This watch has brought so much success and happiness. In conclusion this is one of the most important watches of my amazing private collection. A masterpiece that not only inspired me professionally but also personally,” said Jean-Claude Biver.

Jean-Claude Biver is a legend in the watch industry previously serving as the chief executive officer of Hublot and TAG Heuer. From 2014, he was the president of LVMH’s watchmaking division until his retirement in 2018, after 43 years in the industry.  Mr. Biver was also successful in rejuvenating the Blancpain and Omega brands, both currently owned by Swatch Group.  Mr. Biver is also known for production of his own exclusive cheese.

Mr. Biver was also the originator of the first TAG Heuer’s Connected Swiss made watch which combines Android Wear functionalities with Swiss watchmaking excellence.  This timepiece is the ultimate embodiment of TAG Heuer’s in cooperation with technology behemoths Google and Intel to develop a smartwatch that can compete with the new Apple Watch.

Mr. Biver and Mr. Moreira launched 12 years ago at BaselWorld, the first digital certification of a luxury watch https://www.youtube.com/watch?v=gIWx_Z6JdJA. They are now repeating this technology breakthrough with the use of Digital Identification combined with NFT to use the existing digital certificate of authenticity on the Hublot watch and creating a Digital Twin with its corresponding NFT.

“I am delighted to join JC Biver again in demonstrating how latest technologies can disrupt an entire industry such as the luxury watch industry. WISeKey is launching this first ever luxury watch NFT auction to demonstrate its technology and encourage luxury watch brands to start using it to auction their high-end watches through WIS.Watch NFTs.  Two weeks ago, we launched WISe.Art, a digital certificate of authenticity, a NFT for art pieces that will live forever on the blockchain, unchanged and unchallengeable, as proof of the buyer’s ownership. This announcement generated strong interest from the luxury and art community,” said Carlos Moreira.

WISeKey, was the first company in the world to use dual factor authentication combined with blockchain technology to secure luxury watches, currently protects over 2.5 million luxury watches. Since 2010, WISeKey has collaborated with manufactures of luxury watches deploying this unique technology to integrate semiconductors tags powered with its VaultIC154 NFC secure element and provide brands with the ability of:

Dematerialization and creation of a Digital Twin with its corresponded NFT: these tags, when placed on any product and tapped by an NFC phone, securely authenticate, and track the product much like an embedded ePassport and confirm the identity of the product on the blockchain ledger. This technology has received a patent in the USA http://patft.uspto.gov/netacgi/nph-Parser?Sect1=PTO2&Sect2=HITOFF&p=1&u=%2Fnetahtml%2FPTO%2Fsearch-bool.html&r=8&f=G&l=50&co1=AND&d=PTXT&s1=wisekey&OS=wisekey&RS=wisekey.

About WISeKey
WISeKey (NASDAQ: WKEY; SIX Swiss Exchange: WIHN) is a leading global cybersecurity company currently deploying large scale digital identity ecosystems for people and objects using Blockchain, AI and IoT respecting the Human as the Fulcrum of the Internet. WISeKey microprocessors secure the pervasive computing shaping today’s Internet of Everything. WISeKey IoT has an install base of over 1.5 billion microchips in virtually all IoT sectors (connected cars, smart cities, drones, agricultural sensors, anti-counterfeiting, smart lighting, servers, computers, mobile phones, crypto tokens etc.).  WISeKey is uniquely positioned to be at the edge of IoT as our semiconductors produce a huge amount of Big Data that, when analyzed with Artificial Intelligence (AI), can help industrial applications to predict the failure of their equipment before it happens.

Disclaimer:
This communication expressly or implicitly contains certain forward-looking statements concerning WISeKey International Holding Ltd and its business. Such statements involve certain known and unknown risks, uncertainties, and other factors, which could cause the actual results, financial condition, performance, or achievements of WISeKey International Holding Ltd to be materially different from any future results, performance or achievements expressed or implied by such forward-looking statements. WISeKey International Holding Ltd is providing this communication as of this date and does not undertake to update any forward-looking statements contained herein as a result of new information, future events or otherwise.
This press release does not constitute an offer to sell, or a solicitation of an offer to buy, any securities, and it does not constitute an offering prospectus within the meaning of article 652a or article 1156 of the Swiss Code of Obligations or a listing prospectus within the meaning of the listing rules of the SIX Swiss Exchange. Investors must rely on their own evaluation of WISeKey and its securities, including the merits and risks involved. Nothing contained herein is, or shall be relied on as, a promise or representation as to the future performance of WISeKey.

WISeKey $WKEY to Auction the First Ever Secure Luxury Non...

Jean-Claude Biver and the Swiss company WISeKey are leadi...