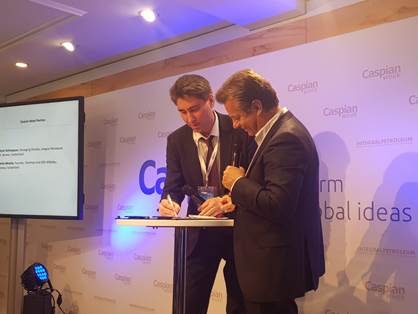 This collaboration enables financial institutions, corporations, regulators and local governments in the region to use cutting-edge technologies based on enterprise PKI and Blockchain solutions from WISeKey and its global network of Trusted Ecosystems of partners.

Additionally, the partnership includes the deployment of WISeCoin in the Caspian region. Powered by WISeKey Semiconductors and secured by WISeKey Root of Trust (“RoT”) and Public Key Infrastructure (“PKI”), WISeCoin offers connected objects the ability to identify and authenticate each other, initiate and then complete secure transactions.

Each connected object is equipped with WISeKey’s Secure Element consisting of a tamper resistant silicon chip, part of its VaultIC family. The state-of-the-art secure microcontroller, which can be easily integrated in any object by the manufacturer, is offered as a provisioning service to transfer the burden of device personalization to WISeKey’s secure Personalization Center. It is a next-generation technology designed from the ground up to be the data and value transfer layer for the Machine Economy.

Along with its energy resources, the economic, cultural and ethnic ties of the Caspian Region extend well into Eastern Europe and Asia, making it a real regional hub. WISeKey, in collaboration with Integral Petroleum will create a gold-backed Caspian Coin, which will be rapidly followed by a Compliance Token and settlement for computing power provided on demand as a commodity.

“We are happy to collaborate with Integral Petroleum in developing PKI, IoT and Blockchain solutions for the Caspian Region. Our common goal is to create growth opportunities for start-up companies in the Caspian Region using algorithmically balanced ecosystems of trading and investment platforms,” said Carlos Moreno, VP Corporate Alliances and Partnership of WISeKey.

“Integral Petroleum SA is implementing several digital projects, mostly connected to our core business of trading and logistics. We expect that the partnership with WISeKey, a well-established leader of digital innovations will lead to a successful implementation of these projects,” said Murat Seitnepesov, CEO of Integral Petroleum.

In 2015 Integral Petroleum became one of the largest exporters and logistics providers for crude oil and petroleum products originating from Caspian Region. The company is also trading other commodities and also provides multimodal logistics services.

WISeKey (SIX Swiss Exchange: WIHN) is a leading global cybersecurity company currently deploying large scale digital identity ecosystems for people and objects using Blockchain, AI and IoT respecting the Human as the Fulcrum of the Internet. WISeKey Microprocessors Secures the pervasive computing shaping today’s Internet of Everything. WISeKey IoT has an install base of over 1.5 billion microchips in virtually all IoT sectors (connected cars, smart cities, drones, agricultural sensors, anti-counterfeiting, smart lighting, servers, computers, mobile phones, crypto tokens etc.).  WISeKey is uniquely positioned to be at the edge of IoT as our semiconductors produce a huge amount of Big Data that, when analyzed with Artificial Intelligence (AI), can help industrial applications to predict the failure of their equipment before it happens.

This press release does not constitute an offer to sell, or a solicitation of an offer to buy, any securities, and it does not constitute an offering prospectus within the meaning of article 652a or article 1156 of the Swiss Code of Obligations or a listing prospectus within the meaning of the listing rules of the SIX Swiss Exchange. Investors must rely on their own evaluation of WISeKey and its securities, including the merits and risks involved. Nothing contained herein is or shall be relied on as, a promise or representation as to the future performance of WISeKey.

Censof and WISeKey Enter into Strategic Partnership to Ex...

WISeKey reconfirms repayment in full of its financial deb...